Chargers get HOT Right at the Right Time 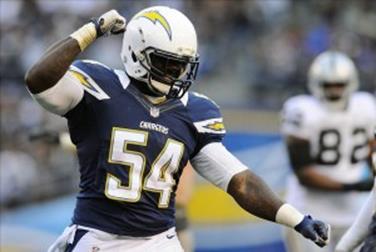 Nine days ago, the San Diego Chargers had a 1.6% chance of making the playoffs, and they made it in, with a four game winning streak. Salute to chance, a toast for fortune, fate with a flip of the coin, with botched calls by NFL referees, missed chip-shot field goals, unreviewable fakes and 4th down gambles. Plus, thank the Ravens loss (x2), the Dolphins loss (x2) and overall The San Diego Chargers! Credit the football GODS that granted San Diego’s entry to the post season, which seems like an eternity ago since they were last in it, considering it used to be such a regular thing…

San Diego faces an extremely tough football team this Sunday in the Cincinnati Bengals and it’s up to Philip Rivers and Ryan Mathews to find a simple weakness and exploit this fierce Bengal defense. Powered by a powerful defensive line, savvy secondary and sound linebacker corps that play with a ‘chip on their shoulder’, the Bengals defense is top notch and one of the best and most intimidating in the league (even with their best player Geno Atkins out with injury). If O-tackles King Dunlop and DJ Fluker can protect Rivers, a short yard passing strike may be the best way to attack Cincinnati. Quick strikes to Woodhead and Gates can be the 1-2 punch for this game plan, with some intermediate passes to Green and Allen. But if it’s cold and wet, San Diego is going to lean heavy on Ryan Mathews rushing, as he’s having a career year and a primetime player on this team. Bold Prediction: WR Vincent Brown sneaks under the radar and has a huge game.

The Bengals offense is a little bipolar, as they can dominate one game or toss multiple interceptions the next. What makes this unit flourish is their youth. Their top offensive playmakers are all under 26 years old (Dalton 26, Green 25, Bernard 22). And with youth comes inexperience, and with inexperience, comes errors. Overall, Cincinnati will be an very difficult challenge for the Bolts. If San Diego can stir up continuous pressure on Andy Dalton, with some tropical and unique pass rushing (just to cause a little tiny bit of confusion) the Chargers defense may have a chance. Look for D-Ends Kendal Reyes and Corey Luiget to have explosive games, and with OLB Melvin Ingram playing more (and angry) to provide a spark for this defensive pass rushing unit. If Gilchrist (or Addae) can have a decent/sold game, then Eric Weddle can freelance more and create unpredicted turnovers. Bold Prediction: CB Shareece Wright stays glued to AJ Green all game long and gets a big interception.

And with one of the largest factors in this game, San Diego is playing on the road in cold WET Cincinnati. It will be a very difficult task to find a win, but Chargers fans are optimistic and are staying positive. The Chargers haven’t had a chance all season long (within the national media), but somehow a 9-7 team, and the third AFC West team, squeaked into the playoffs with the “One game at a time, one play at a time” mentality. There might be a better than 1.6% for San Diego to win this game in Cincinnati (than for them getting into the playoffs).

Posted on December 31, 2013, in NFL. Bookmark the permalink. Leave a comment.