← Predicting the Chargers vs. the Redskins
Chargers get HOT Right at the Right Time → 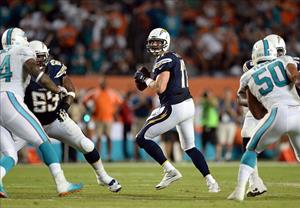 The San Diego Chargers lose to the Miami Dolphins this week in a game that went to the last play of the game, again. This put San Diego in a three game losing streak (all close games); losing to the Redskins by 6 points, Broncos by 8 points and now the Dolphins by 4 points. Each game has gone to the wire, to the last minute and to the last play. San Diego failed again to score the points at the end of the game.

Chargers fans would expect a better record and better performance, but with the third year in a row, the Chargers offensive line has been annihilated with injuries. Shuffling healthy bodies around the O-line seems to be the blocking norm over the last few years. The Chargers offensive line is like a Texas Holdem card game; The flop (Jeromey Clary & DJ Fluker getting shuffled around); the TURN (New Guys filling in the holes); and the shuffling all these linemen around effects: The RIVERS (and the passing game).

Chargers starting O-line have been a revolving door for the last few years, and this year is no different. How quarterback Phillip Rivers remains in one-piece is a miracle. With these massive O-line injuries, Chargers fans should be grateful for already possessing 4 wins out of 10 games. This unit is relying solely on scheme and play calling, which is fundamentally a cornerstone, but the offensive line needs a shimmer of luck with some timely healing.

Left Tackle King Dunlap was out again with a neck injury this week, and was swapped by right tackle DJ Fluker, who played admirably with the emergency fill-in role, again. Right Guard Jeromey Clary slid over to take back his old right tackle position and did a decent job. In fact, keeping Clary on the roster this year has been a nice surprise, as he can play multiple positions (even if at average).

On the bright side, San Diego’s rookie offensive tackle DJ Fluker is improving greatly every week, but still has his rookie moments and blocking mistakes. Yet Fluker could be arguably the best O-linemen on the team. He is clearly not a left tackle, but he should be a Chargers force on the right side for the next decade. Looking back at the draft, San Diego made the correct decision by selecting the Missing-Link Tackle.

San Diego did play well at times, but only managed to score two field goals in the second half (and one touchdown for the game). San Diego has always been considered a “second half team” (within games and seasons), yet over the last three games, old Chargers fads and habits have failed.

San Diego has the tools and the weapons to be a high powered offense, but take away a quarterbacks protection and offensive line, no team will score points. The San Diego Chargers have not folded yet. 6 loses does not eliminate them from the playoffs and the fans are still All-In.

Posted on November 19, 2013, in NFL. Bookmark the permalink. Leave a comment.

← Predicting the Chargers vs. the Redskins
Chargers get HOT Right at the Right Time →