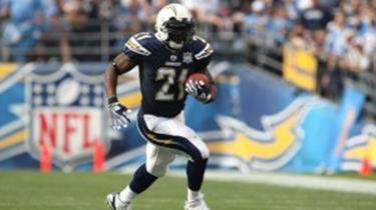 By no means am I a fantasy football master, guru, professional (or whatever you want to call it). No one is. It’s like saying you are very good at the lottery (or Rock, Paper, Scissors). Fantasy Football is a guessing game, mixed with some prediction, injury and waiver wire pickups (but most of all TRADES). Sure, knowledge and education can help, same with league point formats, but no one can guess Russell Wilson or Alfred Morris would be amazing ROOKIE fantasy footballers, or that C.J. Spiller and Dez Bryant would be as great as they really were in 2012. (BTW: I traded Dez Bryant away for Phillip Rivers around week 5, HUGE MISTAKE).

I’ve been playing fantasy football competitively since 1998. Back in the 90′s, I played every fantasy sport you could think of (including hockey, Nascar, Golf and way too much baseball). I even wrote for a fantasy football advice website in 1990 and covered the Chargers and the AFC West.

One of the bonuses of using Yahoo! Fantasy leagues; they keep your Fantasy Sports Profile. It’s no exactly 100% accurate, but it’s pretty close. I tried to get some information from my old teams, but not every roster is available, but I did find my team from 2001 (and I had Payton Manning, Terrell & LaDainian Tomlinson).

I eventually graduated from the silly Yahoo! leagues and moved onto CBS Sports Line ultra-competitive PAY leagues. I was in a local KEEPER league 2005 to 2010 in San Diego (The Ocean Beach Fantasy Football League) where you keep one player from the previous year’s roster. I was granted the privilege of drafting Mr. Marvelous, Marshall Faulk (at the end of his career), but luckily I found a trade partner and won LT, LaDainian Tomlinson. He was the BEST keeper a Chargers fan could own, PLUS he was the premier fantasy footballer in all KEEPER league formats.

I won the league for a 3 year stretch, and got paid pretty well from it too. It was a $135 buy-in league with a great group of people that all lived in San Diego. I moved away from Ocean Beach in 2008, and still participated in the league for a few years after that. LaDainian lost his shine, and lost his keeper value, when our fantasy football league decided changed formats to a TWO PLAYER KEEPER league. That’s where I drew the line, as Panthers Steve Smith and Jets LaDainian were not valued KEEPERS. I didn’t like the “change” so I left the league. It wasn’t a good $135 investment…

I had kids, lost some of my “fantasy-flow” and went into fantasy football exile in Seattle. I was a newly married man that worked from home, in a new city, without my league and my friends. I had clout in that league as I was champ for a few years. My opponents were all very good, and our drafts could last all day long, but even hung over with a dozen beers in my belly, I still could master a draft. I miss that old league, and I miss San Diego.

I have a new LOCAL fantasy football “gentlemen’s” league now. It’s with two of my neighbors and a group of friends. I joined this league last year and got my ass kicked. It is a PPR league (points per reception) / 3 starting Wide Receivers, which was really dominated by running Quarterbacks scoring (where I had Cutler and Rivers at QB). I was not used to this custom scoring format and lost a lot of very close games. And I still have low fantasy-flow and no clout…

So, I enter this 2012 year with AJ Green (or Matt Forte) as my keeper, with a clear drafting strategy to make up for last seasons collapses. If I can hang my hat on one fantasy football attribute, it’s my draft (followed by my trades and waiver wire pickups). Can I earn clout in 2013? I’ll keep you posted…

Here are my FIVE basic RULES for a fantasy football draft (but do not share your rules with your opponents):

Here are some OLD rosters I found from my old Yahoo! Fantasy Profile (check out some of those old players – like Freddie Jones): 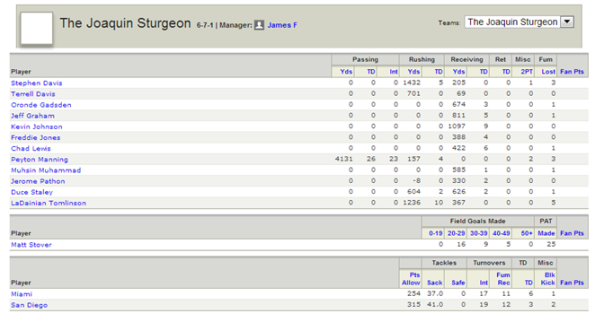 2003 – No Roster Available, but won the league, undefeated: