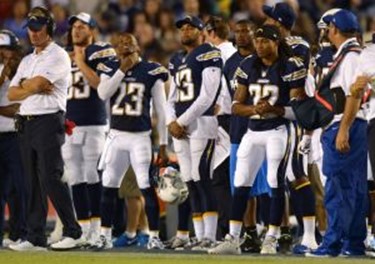 The San Diego Chargers lose Friday night’s preseason game to Super Bowl Champions Seattle Seahawks. With a lopsided score of 41-14, it really looked like Seattle punished San Diego with an old fashion beat-down. Seattle ran the ball down the Chargers throats but what did the overall outcome really prove? Several things, other than the score and starters stats. This is preseason game, which is only practice.

Chargers’ defense needs to work on stopping the run and containing mobile quarterbacks, while the offense needs to spring some longer rushing plays, find the fourth running back, and the offensive line needs to get nastier… But then again, this is grading the Chargers backup players (as San Diego’s starters did not play much at all in this game).

Judging preseason games in years past, the Chargers tend to play better in the regular season when they do lose a few of these preseason games. San Diego has been the type of football team that learns by their own mistakes, which makes them stronger down the stretch (when it is supposed to matter). No one likes losing, and losing in preseason still provides that “bad-feeling” (yet preseason games mean exactly nothing in reality). Preseason is only an experiment, a practice to test your depth, provide those backups solid reps to develop and most important, learning what you have as a team, to find out what you really need. Please note, some of the worst Chargers teams, won all of their preseason games. Preseason is only for the coaching staff to grade their pre-team and for team owners to charge a premium ticket on a game that does not mean anything.

Thinking as the Chargers General Manager, Tom Telesco (and the scouting staff) are continuously building this team. They get no break, as it’s an evolving team. They continue to work on the depth chart with every played game, tinker with the lineups vs. matchups, etc. Dozens of quality players will become available once final cuts occur, so the scouting staff is examining every NFL preseason game (live, attending the games and/or watching all game tape). This Chargers team is very full right now, with decent depth, but pending any injury (i.e. defensive lineman), any position may be in need before the regular season. This team is still being developed and Telesco can find good players from other teams. Telesco has poached from his old team last season, who will he find before this season begins?

Thinking as the Chargers coaching staff, they are finding what they want, from who they have, with some possible modifications to their scheme, strategy and play-calling. The coaches are expected to smooth out this team (by week one) and Coach Mike McCoy will manage the team to its strengths. McCoy and Telesco will get what they want and they will use this Seahawks/Chargers game for what it was intended for (practice).

Learning from your own mistakes or learning from others mistakes is the true result of the Chargers / Seahawks game. Both teams made mistakes, and both had their highlights. Winning and not making mistakes is preferred and ideal for a game, but perfection is impossible and certainly lacks one key component; that losing feeling (which no one wants). Seattle made mistakes and won, San Diego made mistakes and lost. San Diego won that losing feeling and will learn from their mistakes, which is a great lesson to learn from the type of game this really was and what type of team the Seahawk are, with their home field. From what it was, advantage: San Diego