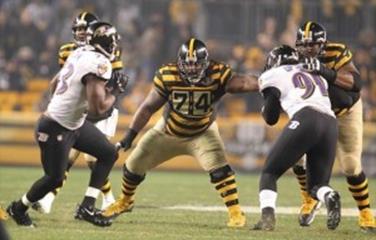 San Diego solidified their offensive line by signing another left tackle, 31 year old Max Starks. Starks was drafted in the 3rd round, played for the Pittsburgh Steelers for the last 9 years and is a nice upgrade. The Charges other new left tackle, 27 year old King Dunlap, who played in Philadelphia the last 5 seasons. Thank you Pennsylvania.  Both Starks and Dunlap are not pro-bowlers, nor all-pro caliber left tackles, but both are above average professionals and will be a huge upgrade over last seasons Harris, Haslem and Gaither revolving left-tackle door.

The Chargers also added two new guards: 28 year old Chad Rinehart (an up and coming blue-collar talent) drafted in the third round, and 27 year old Rich Ohrnberger guard/center (the class clown) was drafted in the fourth round. Chargers 2012 rookie guard Johnnie Troutman will be given a shot at a starting role, and good ole’ Chargers right tackle Jeromey Clary will be moving to right guard from right tackle (for the moment). Centers Nick Hardwick and David Molk make a formidable 1,2 punch, with Colin Baxter still hanging around fighting too.  Brandyn Dombrowski can play anywhere on the line, and last years starting left tackle Michael Harris has consigned some quality reps against formidable foes last season, which should only make him better in the future.

For the first time in over two years, the San Diego offensive line starters and depth look very promising and satisfying on paper.  Since Marcus McNeil and Chris Dielman’s sudden retirements (and injuries) in 2011, San Diego has improved with pure size and talent this off season. But what made the Chargers offensive line productive in 2010 and years prior was their continuity. They played well together for a long time.  Offensive linemen are the core of a good offense. They control the run, they control the pass protection, they control the tempo and (from what we have seen by Rivers the past two seasons)  they help copilot a quarterback. Playing together for several years build this continuity and stability (even with a lack of talent). Playing together, in repetition is better than five first round pro-bowl linemen playing together for the first time.  But talent is a solid foundation for the Chargers to build on and good coaching should bring this all together in San Diego, especially with the new offensive line coach Joe D’alessandris (one of the best in the business).

This new Chargers O-Line, with new players, new design, new scheme, with positional changes and new coaches, it is actually designed to succeed now, and with very little money and terms invested. A team weakness now looks like a team strength.  Call it a Perfect Storm or a Stepping Stone to the future, new Chargers General Manager Tom Telesco has been very pleasing to watch direct and build this new team, especially in what very little salary cap he has to work, lack of talent that was inherited, and the first round of an odd draft that was dealt to him.  The 40 year old GM has done well (young grasshopper) and Tom Telesco still needs his new nickname, yet everything is still theoretical until some games are actually played.

I’ll start one: The Tommy Lama